This past week, my parents came to visit me in Barcelona. After showing them all of the typical touristy sites that Barcelona has to offer including Sagrada Familia, Casa Batllo, and Montjuic, we headed to Rome as my parents have been dying to go there for a very long time! Our hotel was conveniently located extremely close to the Colosseum and St. Pietro in Vincoli which is a church where Michelangelo’s famous Moses statue is located.

We arrived in Rome around 8:30 PM and after checking into our hotel, we went straight to a classic Italian meal. We went to a restaurant called Dar Poeta, which is notorious for having “the best pizza” in Rome. 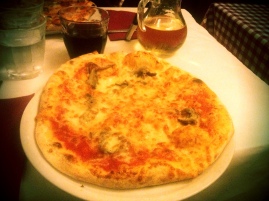 Naturally, this place definitely did not disappoint me nor my mother, father or sister. We indulged in a typical Italian meat and cheese plate that included fresh mozzarella cheese and prosciutto, and some of the best red wine I have ever tasted.  Along with this, we ordered a personal pizza that included fresh tomato sauce and grilled eggplant. YUM!

Of course visiting the Vatican is a must when visiting Rome. Did you know that the Vatican is located in its own country called Vatican City? I sure did not! My family and I went on a 3 hour tour of the Vatican and Sistine Chapel with a tour guide. Honestly, I felt that the tour was a bit too long.  On the other hand, it was really interesting to be able to see a lot of history and also be able to visit the Sistine Chapel and St. Peter’s Basillica.

Obviously after this long tour we were all starving and went straight to lunch near The Pantheon.  We stopped into a random restaurant on a side street and much to our surprise, it was one of our favorite meals in Rome. We enjoyed an amazing zucchini fritatta which is basically just zucchini with eggs and then we each ordered Spaghetti Carbonara followed by amazing Snickers and Ferrero Rocher gelato. 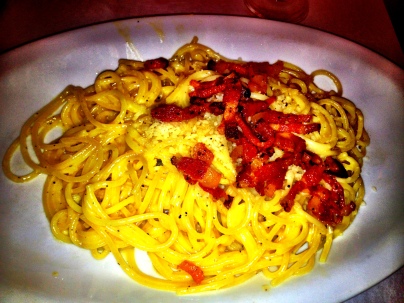 This spaghetti carbonara was unlike anything I had ever tasted before and included two of my favorite things, eggs and bacon. This random place definitely did not disappoint and I wish that I remembered the name so that I could share it with you all and you could taste it for yourself! We ended our day at the Trevi Fountain. The fountain is so beautiful and of course I made quite a few wishes by tossing some coins into it.

The next day, we went on another long tour but this one was ultimately way more intriguing than the one of the Vatican the previous day.  This day we went to to Colosseum, The Roman Forum and Palatine Hill.  It was amazing to see the roman ruins and hear all of the history about what this place used to look like thousands of years ago. 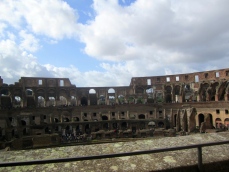 It is crazy to think that there are still some remains in Rome from so long ago and that tourists are able to see all of this for themselves.

Later on, we visited the Jewish Ghetto in Rome where there is an original synagogue and museum.  This was really interesting as I was unaware that there was such a large Jewish community in Rome and it was great to hear about all of the history.  This great day of touring Rome was followed by some shopping on Via Babuino which has amazing, small boutique shops and also the Spanish Steps.  The steps were unimpressive but the shopping around them definitely was! There is an amazing store on Via Babuino called Gente that has amazing designer goods.  Here, I purchased an amazing Stella McCartney wallet which I have been dying to purchase for quite some time now. I am so glad that I was able to not only purchase it but be able to purchase it in Rome!

This long, exciting day ended at Hostaria del Moro da Tony.  This restaurant was recommended to my family by about 5 different people.  Of course this place is American-style Italian food but it was amazing and the waitstaff treated us like royalty as they served us endless amounts of free wine, free dessert and free limoncello at the end of the meal.  This was not all as they even gave us a 20%  discount on our entire bill.  At Hostaria del Moro da Tony or otherwise known as “Tony’s”, we indulged in another meat and cheese plate, chicken parmesan, eggplant parmesan and penne alla vodka. This was an amazing last meal in Rome and you absolutely must go to this place if you find yourself in Rome sometime soon!!!!

This was an amazing weekend in Rome and I would not have wanted to experience it with anyone else but leaving my family was sad because I will not see them again until the end of my adventure here in Europe.