This week in Journalim 2.0, we started to discuss Social Networks. This topic to me is extremely interesting because social networks make up a large part of my life.  As sad as it is, I spend a large amount of my time on social networks such as Facebook, Instagram and Twitter.  Also, in this day and age, social media is all the rage and most people have a social networking account.  Typically, people have Facebook accounts, as we have learned that over 1 billion people have a Facebook account. This seems absolutely crazy to me but on the other hand, it is not a surprise as even my 80 year-old grandmother has a Facebook account, although she does not use it regularly.

A social network “allows you to connect with other people”. Today, most of communication is no longer face-to-face or direct communication as a large amount of daily communication occurs through social networking.  For example, I communicate with many people over Facebook message rather than face-to-face due to the convenience of it and because I am ultimately so used to it.  While there are many social networks such as Facebook and Twitter which are “Chat and Inform” types of social networks, the introduction of LinkedIn into the social networking world presents a way for professionals to connect and network with others.  I personally use LinkedIn as a great way to connect with potential employers for internships and also to find out about internships for the upcoming summer.  Without this tool, I likely would not be connected to as many people professionally and it would be more difficult to find out about future employment opportunities.  In this day and age where people are ultimately lazy and like things to be all in one place, it makes it convenient to have a source such as LinkedIn.

It also came as no surprise to me that Facebook is the most popular social networking site in the world. What did came as a surprise, though, was that Blogger is the second most popular social networking site in terms of unique visitors because I have personally never heard of Blogger and I do not know anyone who uses that site.  This ultimately connects social networking to blogging and shows the current popularity of blogging today. This shows the popularity and dominance of blogging around the world today as even Twitter can be seen as a type of blogging called microblogging because it is because expressing your views about any topic that you wish to in 140 characters. 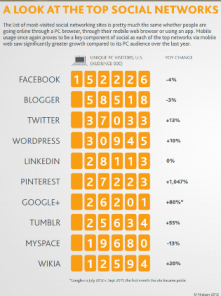